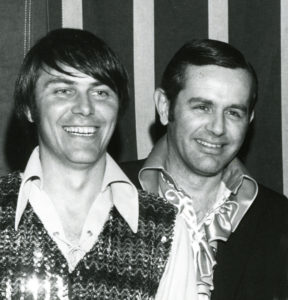 It was the original Record Plant New York in 1968 that set the standard for a new type of recording environment that served every creative, personal and technical need of its artists.  With Jimi Hendrix as its first customer and “Electric Ladyland” its first album, and one of the first 12-track recorders, the music industry quickly discovered that an engineer named Gary Kellgren had created a very special room.

Kellgren was the visionary studio designer and engineer and his partner, Chris Stone, was the business brains and creative-enabler.  Together they created the first living-room style musical workspaces, and pushed the boundaries of multi-track recording, analog sound design and studio acoustics, while creating musical homes for artists including the Eagles, Stevie Wonder, Crosby, Stills, Nash and Young, Fleetwood Mac, Aerosmith, Bruce Springsteen, Sly and the Family Stone, John Lennon and, individually, every other member of The Beatles, among thousands of others.  The Record Plant helped launch the careers of scores of top producers and engineers who influence the making of music to this day.

Gary Kellgren was born in 1939 in Shenandoah, Iowa, and made his way to New York City in the mid-sixties, where he cut songwriter demos alongside future Eagles producer Bill Syzmczyk. Within a few years Kellgren had established himself as the recording engineer of choice for a brilliant new generation of music artists, beginning with Jimi Hendrix, Frank Zappa and the Velvet Underground.

Chris Stone was born in 1935 in San Francisco, the son of a fourth generation Gold Rush entrepreneur. After earning his MBA at UCLA, he worked his way up to a top-marketing position with Revlon in New York City where he and Kellgren met through their wives. With a $100,000 outside investment, they built the first Record Plant on West 44th St. in NYC. Years later, Stone would continue to serve the studio elite by co-founding the Music Producers & Engineers Guild of the Americas, which has become today’s Producers & Engineers Wing of the Recording Academy.

The rapid success of Record Plant New York led to the move out west to serve the burgeoning LA scene.  Equipped with the latest gear, plus comforts like a Jacuzzi and themed ‘hotel rooms,” Kellgren and Stone opened up the LA Record Plant on December 4, 1969. To help design the studio, they called in Tom Hidley, who made his pioneering breakthroughs in studio acoustics while there, and developed the legendary Westlake monitors that answered the high-decibel needs of rock and roll recording.

Meanwhile back in NYC, the ownership was changing.  First Kellgren and Stone sold the facility for stock to a pioneering cable company, TVC, which subsequently sold the studio to Warner Communications, which finally passed ownership of studio to its Chief Engineer Roy Cicala, who mentored an entire generation of producer engineers including Shelly Yakus, Jack Douglas and Jimmy Iovine.  Cicala’s own work with John Lennon, and with legendary hits by Bruce Springsteen, Patti Smith, Aerosmith, Kiss, Alice Cooper, Blondie and scores of other artists, Record Plant NYC became its own industry institution.

Record Plant Sausalito opened on October 28, 1972 and drew rock royalty to its opening night party.  John Lennon, who would spend his famed ‘lost weekend’ at Record Plant LA and the last night of his life at Record Plant NY, attended alongside Yoko Ono, appropriately costumed as trees. Sausalito was where Sly and the Family Stone recorded their greatest hits; it was where the bulk of Fleetwood Mac’s chart-topping Rumours was created. It was the spot where Prince recorded his very first album.

With three locations and a fleet of Record Plant Remote trucks (east and west coast), the brand that Kellgren and Stone built was literally everywhere there was music.  Their Remotes helped capture the magic of the great arena concerts of the era, including the Concert for Bangladesh, Frampton Comes Alive, and the Rumble in the Jungle (Zaire, Africa).

In March 1973, after the spacious Studio C was completed in Los Angeles, Kellgren and George Harrison created the Jim Keltner Fan Club Hour, a series of celebrity Sunday night jam sessions featuring his good friend, studio drummer Jim Keltner. One of those many, invite-only jam sessions in late December 1973 produced the now-legendary super session “Too Many Cooks,” featuring a collaboration between John Lennon (behind the console) and Mick Jagger (on lead vocals).

The studio was rocked in late-seventies by tragedies: Kellgren’s accidental drowning at his Hollywood mansion in July 1977, followed only a few months later by a devastating fire that leveled Studio C in January 1978.  Master tapes from The Eagles, Stephen Stills, Rod Stewart and other stars were among those rescued by Al Kooper and a ‘bucket brigade’ of musicians while the studio burned to the ground.

However, with the help of studio manager Rose Mann, Stone kept the business afloat and by the early-80s it was again thriving, eventually outgrowing the Third Street location in 1985.  The industry celebrated the closing of what some say was the ‘real Hotel California’ with hundreds of its artists, producers and staff coming together for “The Last Jam,” led by Joe Walsh, Stephen Stills, and Al Kooper. The following year, the reborn Record Plant opened on Sycamore Street in the former Radio Recorders “Annex”, an historic studio where Elvis Presley and Louis Armstrong had recorded.

50 years since a chance meeting between Kellgren and Stone changed the course of recording history, the LA Record Plant and Record Plant Remote continue to make music for a new generation of artists. The 10th floor studio in NYC is now a mastering studio owned by Sony Music Entertainment. Countless producers and engineers learned their craft firsthand from Kellgren and Cicala. The Record Plant’s design and technology innovations set a global standard for the studios of that era. Stone literally wrote the book – “The Sound of Money” — about how a studio business should be run.

And hundreds of Record Plant alumni still remember working and playing there as ‘the best years of their lives.‘’