Mike Stone In His Own Words: From Day One

Before his death, Mike Stone was a great friend of the Record Plant Diaries project.  Here, in his own words, are some of his favorite memories about the early days at the Record Plant. 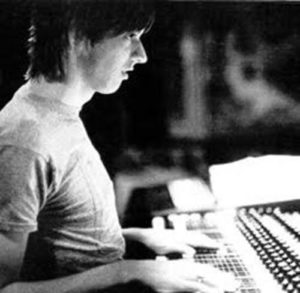 We took possession of 3rd street in the middle of July 1969 and started to demolish what had been the home to a film production company (I say we because like many of you Record Plant was my home from the first moment I walked in until the closing party). First thing we ripped out was the screening room, red velvet chairs and all. It was located in what became the Studio A control room and Isolation booth. The first piece of equipment Gary bought was a refrigerator and every morning I’d go to our favorite liquor store St Regis and buy two cases of beer, one for Gary and one for the rest of us. We did have demolition drama with a wall in the middle of Studio A. It wasn’t on the plans of the existing building, Gary said “it’s not weight-bearing so take it out”. My High School buddy Dan and I stripped the wall down to the studs and then went to the center of the room with sledge hammers. Walking away from each other we knocked out several braces before I looked back and noticed the studs were all bowing from the weight of the ceiling. We were lucky we weren’t wearing the ceiling. Chris came from NY the next day and was not happy about having to buy a new roof.

Gary spoke of a studio where instruments could be isolated from each other to take advantage of the 16 track tape machine and musicians could overdub endlessly. He wanted a environment where producers and musicians would be so comfortable they would feel as if they were in their living room. There were no clocks at Record Plant.

Chris and Gary hired Tom Hidley to handle the acoustical design and together they built the recording studio of their dreams.

The drum trap was a step up cage in the northeast corner of the studio. There were large hanging baffles (soundboard, wrapped in fiberglass, hanging from the ceiling by wire) above the drum platform (which was filled with sand), the walls behind the drummer had fiberglass padding and the front of the cage was a padded wall with swing doors about the height of the tom rack. To the left of the drums was an acoustical trap for the bass amp, fiberglass padded walls with larger hanging baffles hidden behind black burlap fabric. To the right of the drums was a trap for the guitar amp and then a space for the 9’ Yamaha Grand Piano further down the eastern wall. Above the piano was a hanging trap similar to what was above the drums.

The Tree- a semi circular structure covered with cork that went from floor to ceiling on the south wall between the exit door and control room. Hidley created the tree to break up the reflection off that surface. Kellgren put a door on it and turned it into a microphone cabinet.

The 16’ x 4’ mural that hung above the Iso room doors was classic. This was one of Gary’s pet projects and a great example of his creativity. He drew on two 4x 8 sheets of3⁄4” plywood with a pencil till he had the design he wanted and then cut all the pieces out with a jigsaw. He went to Home Silk and chose the fabric, no two pieces of his puzzle were the same size, shape or fabric. After moving the swatches of fabric around for a couple days he was happy and we started the covering process. First you take a sheet of 2” hard pack fiberglass, grab a piece of wood and cut around it with a razorblade knife. It’s a two man job to attach the fabric, one stretching the fabric tightly and the other stapling it to the back of the plywood. All the pieces were then nailed and glued to the wall.

The Iso room was the live room, in contrast to the studio it had hardwood flooring and mirrors on the back wall. The three 6’ panels of sliding glass doors separated the two rooms.
The control room slab was poured separately from the studio slab and machine rubber was placed in between the two. The three angle control room wall was a first, reducing reflection in the studio and housing the custom made Hidley monitors in the control room. While Tom designed

his monitors we temporarily used Tannoy studio monitors. Who can forget the resulting “launching pad” on the roof above reception. The control room opened with a custom 28 channel, eight buss Quad-Eight console with three band EQ and hi/lo pass filters, what a great sounding board! The back of the control room had a large sound trap above a line of tape machines, Ampex 2track, 4track and the 700lb 16-track Ampex MM 1000.

Gary was disappointed when he realized the dimensions of Studio B couldn’t be altered. It was narrow because the west wall was solid brick. The construction was similar to Studio A with the Iso room at the back, a slightly smaller drum cage and 7’ Yamaha piano on the West wall and bass and guitar traps on the East wall. Gary’s creative project in this studio was located above the guitar trap. He shellacked an American Flag into a waiving form then sprayed it heavily with cobwebs capturing a white Dove in front of the flag.
We mailed out the bricks and party made the 11 o’clock news, it showed a mason in a tuxedo building the invitation wall. I saw Eric Burdon from the Animals and Erik Braunn from Iron Butterfly running around causing trouble, but I remember very little because we’d been up for days. All of our opening parties had a lot of work to do at the last minute.
In late November Gary and I did the first session “Hedge & Donna” with Nick Venet producing. Shortly after the party about half of the tapes from Woodstock showed up. We mixed Country Joe and the Fish, Arlo Gutherie and Richie Havens. I’m not sure if anything we mixed made it to the album but I do remember the control room rockin with Jimi Hendirx Purple Haze, Hey Joe and the unforgettable Star Spangled Banner.

That was 1969, if anyone wants to add to my memories please do, I know I have gaps.